Physiotherapy and respiratory education, with the support of Fundación Cepsa

The Fundación Cepsa continues its program of visits to the entities that won the last edition of the Social Value Awards. This time it was the turn of the Oliver Mayor Foundation Against Cystic Fibrosis, which works to help people affected by this disease.

The social worker in Tenerife, Mónica Muñoz, and the Foundation's psychologist, Davinia Rodríguez, received the director of Cepsa in the Canary Islands, José Manuel Fernández-Sabugo, and the head of Fundación Cepsa in the Islands, Belén Machado. They told them about the problems faced on a daily basis by people affected by cystic fibrosis, a disease which mainly affects the respiratory, digestive and reproductive systems.

They also told Fundación Cepsa about their aim both in Tenerife and in Gran Canaria: to improve respiratory symptoms, reduce the functional disability caused by the disease to the greatest possible extent, restore work and social capacity, and improve the quality of life and health of those affected and their families. 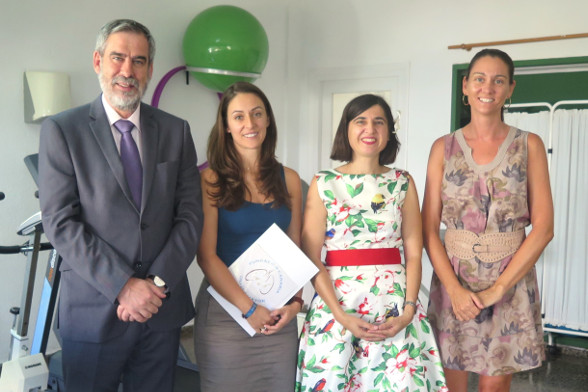 They also attached special importance to the program set up with the help of the Social Value Award received: “Respiratory physiotherapeutic education for people with Cystic Fibrosis and their families”, which has allowed them to directly assist 64 people, including those affected and their direct relatives.
José Manuel Fernández-Sabugo said that, “the rest of society knows very little about this complex disease, and more help is needed to fight it. The Oliver Mayor Foundation provides both professional and human support and care, which are essential to improve the mood and physical well-being of cystic fibrosis patients, increase their self-confidence, and ultimately help them lead a better life.

The Oliver Mayor Canary Islands Foundation offers a complete treatment service, based on physiotherapy sessions and respiratory education, at its headquarters in La Laguna and Las Palmas de Gran Canaria, It offers advice and shows techniques to those affected and their families, so that they include respiratory physiotherapy in their daily routine.

The project presented to the Social Value Awards is doubly innovative, as it offers guidance not only for the patient, but also for their families, while also offering home therapy when required (due to socioeconomic conditions, or because it is necessary due to the clinical manifestations of the disease, to avoid cross infections between patients).

This visit is part of the Fundación Cepsa commitment to forge closer links with the entities that have won the Social Value Awards, in order to get to know in situ the activity they carry out and show them their support. The next edition of these Awards will open on 12 September.