Fundación Cepsa has collaborated on the ninth edition of the Peque Huertos [mini orchards] project run by Santa Cruz de Tenerife City Council through Fundación Santa Cruz Sostenible. The initiative, to encourage healthy diets, involves growing organic produce, and this time round involved over 1,100 elementary school children from public and state-subsidized schools across the city.

Bermúdez shared his satisfaction with a project “that encourages healthy habits among the young through classroom and practical activities in which they learn by growing vegetables in, for example, reused plastic bottles and then caring for them as they grow.”

Meanwhile, Correa highlighted that through these initiatives “school children develop a strong connection with the environment, learning that there are many things in nature that will provide them, for instance, with a more healthy and balanced diet.” 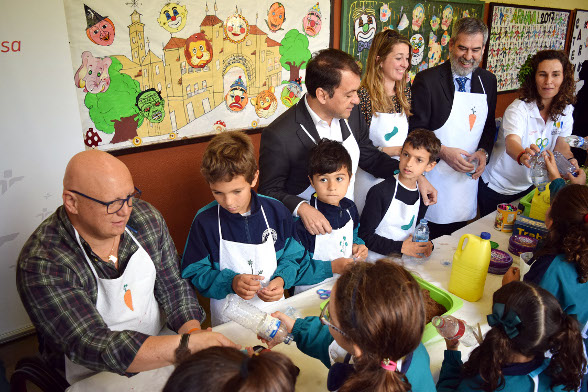 Lastly, Meseguer reported that participants “really enjoyed learning in a fun way and were very keen to find out how to grow tomatoes and parsley at home, involving their families in the task of caring for the environment as a source of life and wealth.”

The main aim of the project is to instill values related with sustainable development and respect for the environment by creating a bottle garden of organic produce. After a talk about key aspects of a healthy diet, organic farming and reuse and recycling, each child is able to plant a mini vegetable garden in a reused plastic bottle that they can take home to watch the plants grow. The activity ends with preparing a healthy dish, mainly made with the products that they have planted, which everyone can try.

Another goal of the initiative is to prevent children from suffering tooth decay or becoming overweight while they are growing and developing, which are caused by eating too much sugar and foods that are high in fat or have a lot of cholesterol.