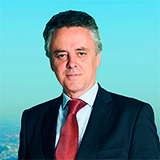 Mr. Ignacio Pinilla Rodriguez earned his Law degree from the Complutense University of Madrid. He became licensed as a State Attorney and worked for the Health and Finance & Treasury Ministries of Spain.  He also served as Corporate Secretary for the cement company Portland Iberia and Secretary to the Board of Directors and Director of Legal Affairs of Construcciones Aeronaúticas and Iberia.

Continue reading
Turn on notifications to stay up to date